The Orox Utilis iPhone wallet/case is a beautiful, well-constucted option to carry your cash, your cards, and your phone (assuming you are a part of the iPhone family).

The Orox Leather Company is a family leather shop located in downtown Portland, Ore, operated by fourth-generation leather workers.  Their unique designs inspired a cult following at the Portland outdoor market, and national buzz has slowly been building.  A visit to their storefront will allow you to get a chance to get some hands-on time with their great and thoughtful messenger bags, bike carriers, lunch bags, and more.  Plus, you will get to shake the hands of the makers themselves.

Orox uses three different leathers, depending on their intended use.  Their straps and accessories come from English bridle leather from an old tannery in Pennsylvania, while their bags mainly use finely oiled leather from the Red Wing (yes, that Red Wing) tannery in Minnesota.  The Utilis classic wallet, however, uses the famed Chromexcel leather from the Horween tannery in Chicago.

The wallet itself is constructed fairly simply.  It is a square piece of Horween leather with flaps sown on either side.  The left side has two slits near the center of in the inner flap for your ID and credit cards to slide into, while a TPU case is sown onto  the right side of the wallet. 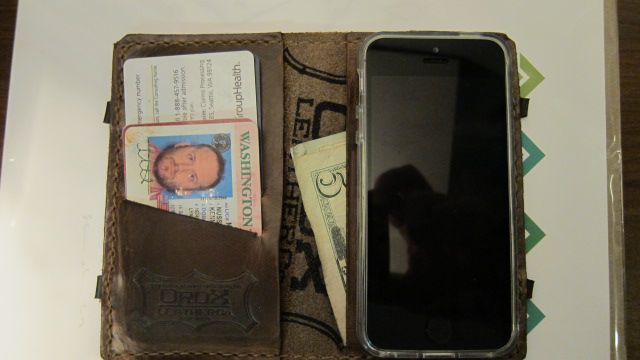 The TPU case (TPU is sort of a silicon/plastic hybrid) is softer than the hard plastic shell than some of its competitors, but it seemed to mold better to my phone and hold the phone more snugly.  The flap underneath the phone is meant for your folded cash.  The width of the wallet allows US currency to fit behind the phone folded just in half.  This helps to keep the wallet’s slim profile.

As I stated previously,  on the left side, there are two slots for credit cards.  The Horween leather stretches to allow you to put as many cards as you need, but the trade-off is that they stack pretty thickly.  I solved this problem by only inserting cards partway into the upper slot, and then tucking the remainder of my cards in the flap behind the card slots.  I am not sure if this would create a design flaw, but I definitely wish that Orox had added a third slit to allow the cards to spread about more thinly. 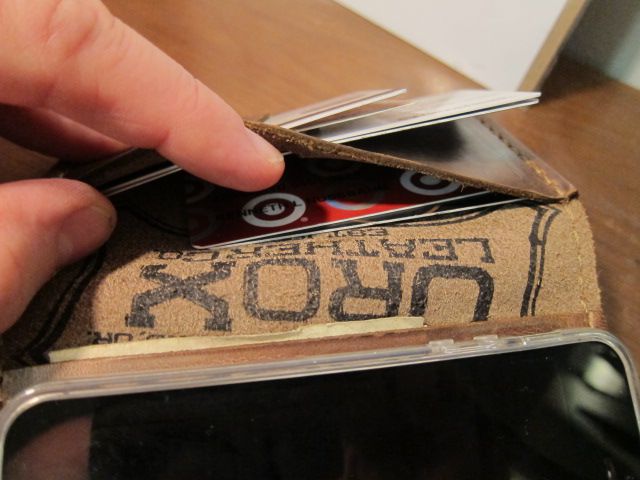 One neat little feature that the Utilis includes is four small rubber tabs, two on each side of the wallet (made from recycled bicycle tires, of course).  These tabs act as little feet, allowing you an easy way to watch Netflix or have a hands-free FaceTime conversation. 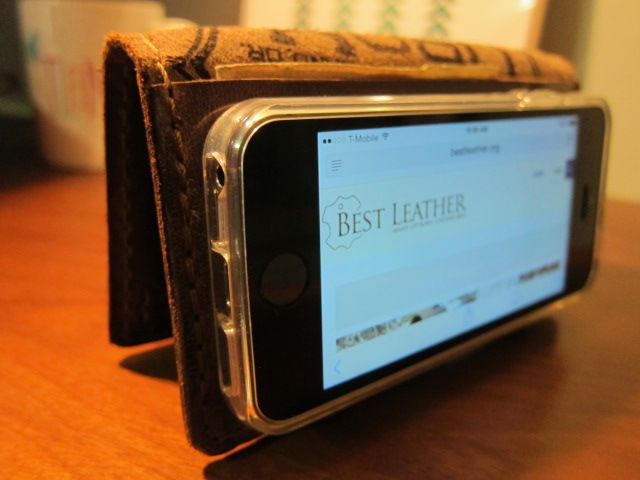 There is one potentially fatal flaw with the Utilis.  There is a hole cut into the back to the wallet for your iPhone’s lens and flash.  On my wallet, the hole is cut slightly too low, leaving a bit of shading on the corner of my photos. 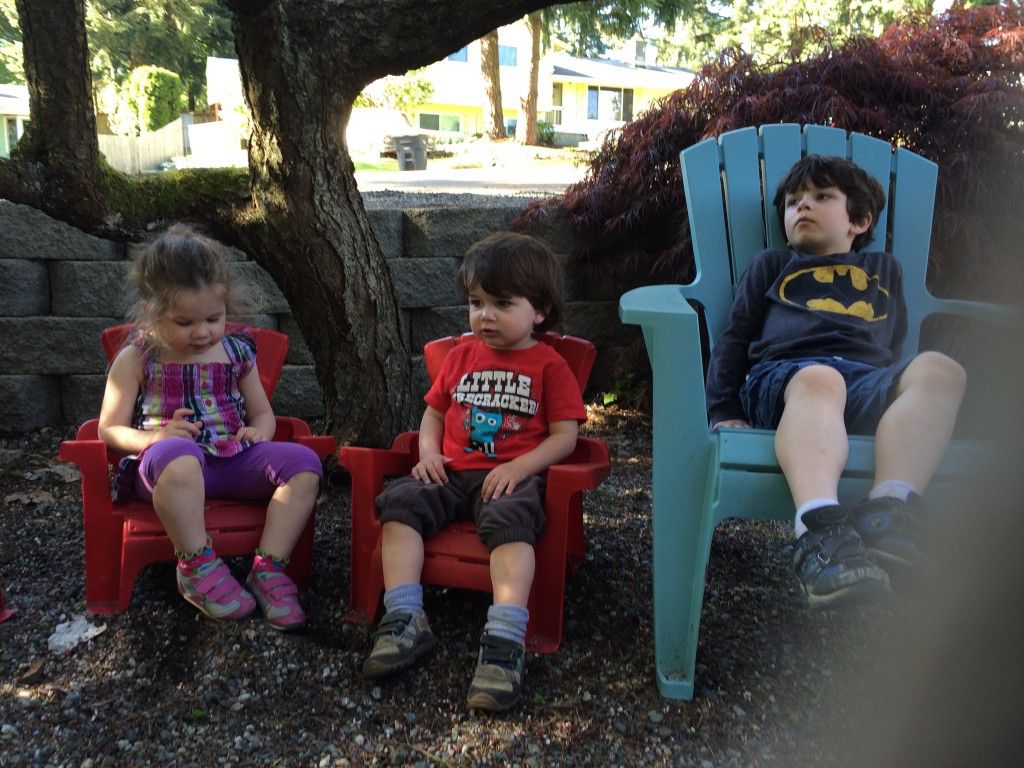 You can see the blur in the bottom right corner of the first photo and the top left of the following picture. 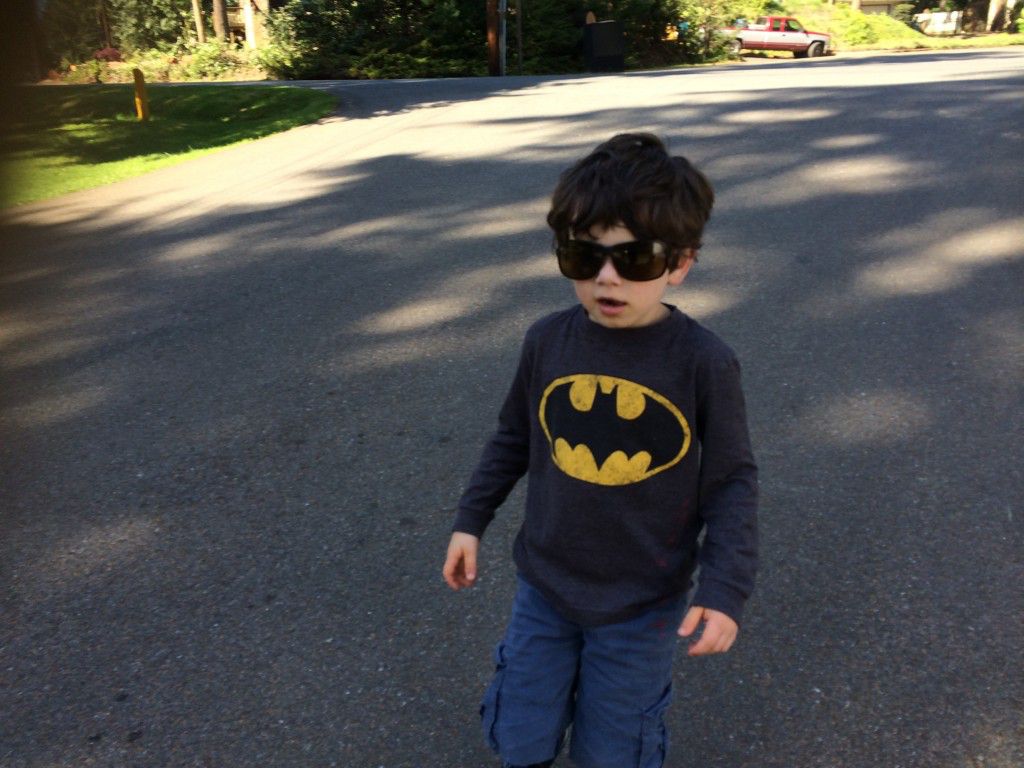 It is simply remedied by pulling the offending corner up and out of the frame, but it is easy to forget and snap a few pictures without pulling that corner out first.  I have reached out to Orox to see if this is a one-off problem or a quirk of the soft leather. I will update this when they respond.

Even with the caveat regarding the small obstruction in front of the camera, I do highly recommend the Orox Utilis iPhone Wallet.  In the brief period of time that it has been my everyday carry, the leather is aging nicely and it is molding to the specific cards, cash, and phone that I have in it. The wallet slips into either my front or back pocket with ease, and it has garnered several positive comments along the way.  If you are looking for a great wallet/phone case hybrid, you should definitely look at the Orox Utilis. 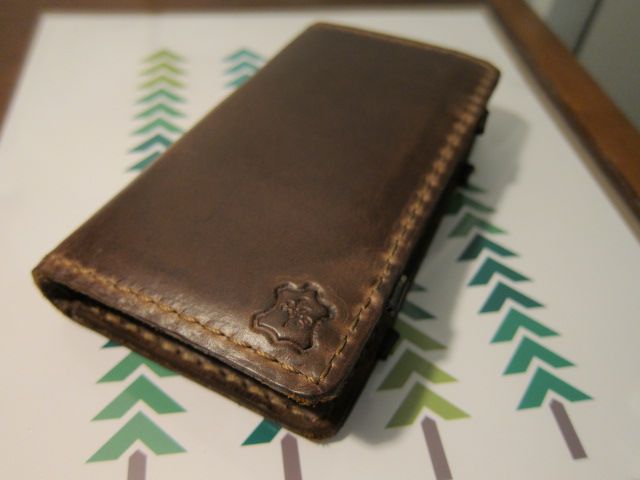 should kitchen cabinets reach the ceiling