Our last look at a Trayvax wallet proved wildly popular among our readers and nabbed the staff pick for best wallet of 2015 here at BestLeather. Trayvax is at it again with a new special Black Edition Trayvax Element version of the original, plus the Keyton Bottle Opener Keychain. If the good ol’ bifold just isn’t honking your horn anymore, read on. 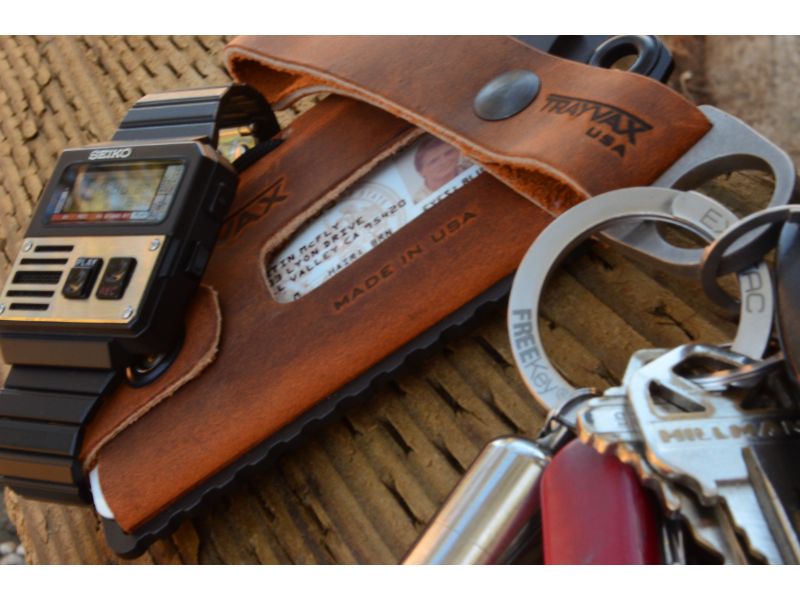 On paper, the Trayvax Element Black Edition is virtually identical to the standard Element. The main difference is Cerakote (a baked on ceramic layer that makes the metal appear black) provides more corrosion resistance after exposure to weather and use over time. The recipe still utilizes 5oz chrome tanned, top grain leather around the stainless steel frame. Mil-spec 550 type III paracord binds the leather to steel. As always, the Element is 100% Made in the US. 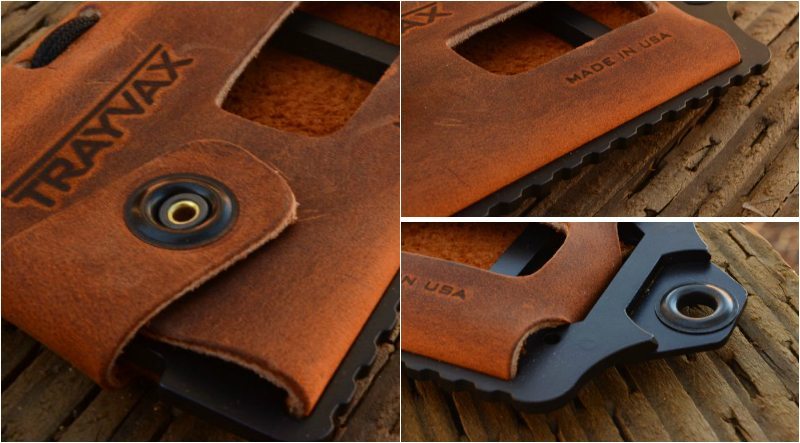 The same US sourced leather is used for the Keyton as well as 304 stainless steel for the loop/bottle opener. 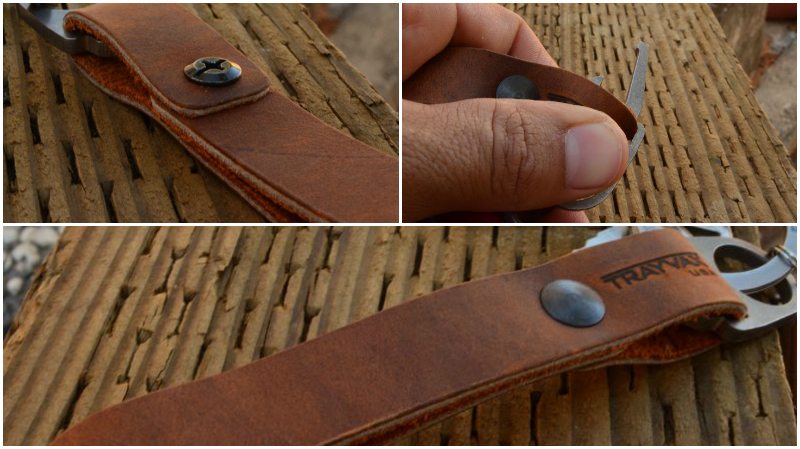 The Element shines through as a utilitarian tool for carrying your cash and cards. The leather snap secures your contents in place, allowing the wallet to tp be carried in  virtually any manner without risk of losing anything. The grommet at the top makes for a perfect option to run some paracord through so you can wear it around your neck, or attach a carabiner and have it hanging from your pack. Cash is stored in the built in clip, allowing for quick access. Still not as convenient as a bifold but you compromise for the space savings. This wallet also has RFID protective qualities which is a nice assurance with today’s security issues. Card access remains straightforward, thoughtful card placement will save you time as you access frequently used cards and the money clip keeps your cash safe and tidy. 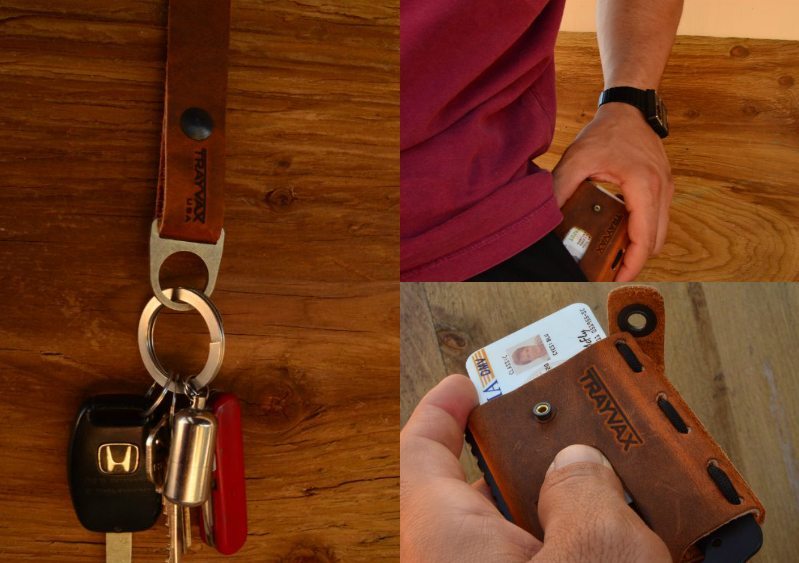 The Keyton is a simple device that loops through your belt, just make sure you put it on before your belt as it won’t unsnap. There is a Philips screw holding the leather together which can be removed, but I wouldn’t see the need. You will pretty much have to have some sort of quick detach device like a carabiner to allow unrestricted key retrieval. I think a sturdy spring release snaphook would have been more convenient than the fixed loop and a button to allow removal of the Keyton without taking off your belt would have made this device a home run. Sometimes though simple is better, the lack of those features also makes the Keyton pretty much indestructible. Did I mention it has a bottle opener hidden under the loop? Well now you know, and knowing is half the battle

The Element and Keyton go together like Kleenex and Steel Magnolias. The models reviewed are both tobacco brown. The tough metal wrapped in leather really adds serious character. Admittedly, the Keyton will usually remain unnoticed and is pretty simplistic anyways but the straightforward, no BS design has a certain appeal. The Element on the other hand refuses to go unnoticed. It’s so unwallety (yep made that word up) that people usually ask questions. The black Cerakote finish is great for getting that “Murdered Out” look so popular among EDCers. 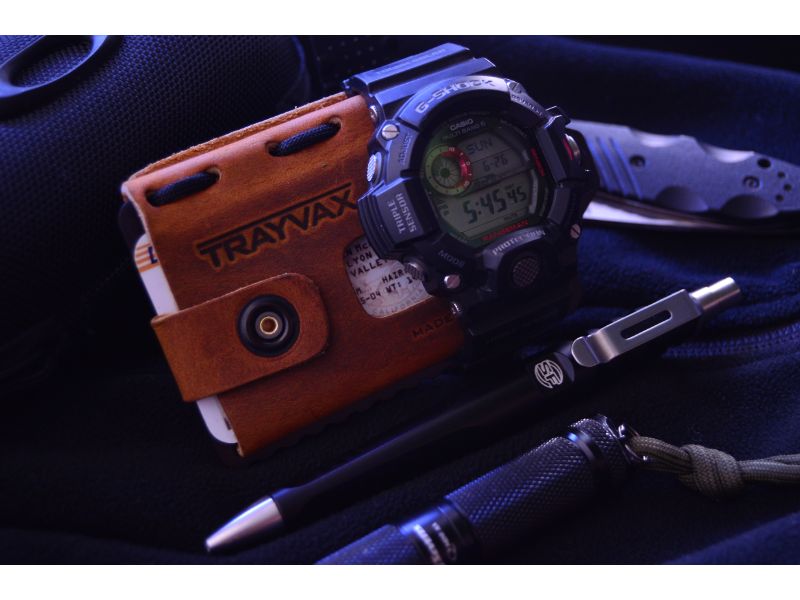 One look at the Element and you just know that was the wallet in Arnie’s back pocket when he defeated the Predator. 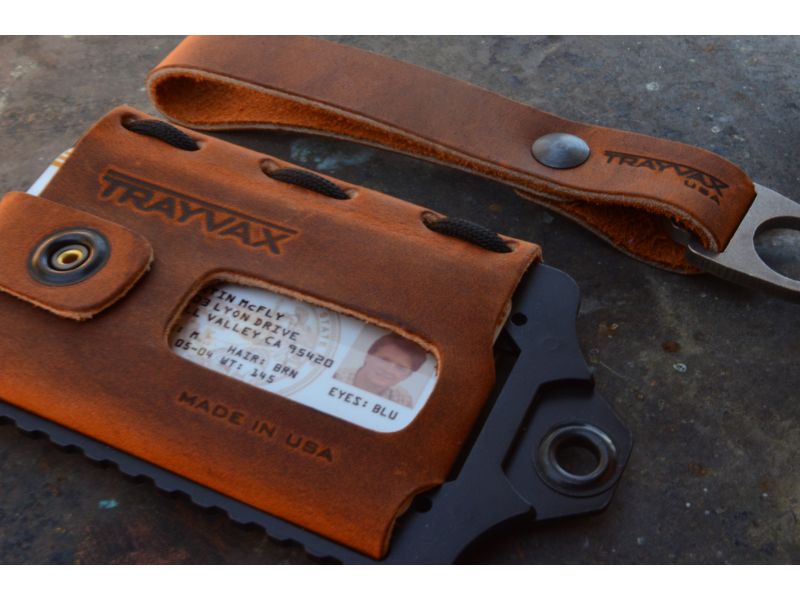 Every Once in awhile a product comes along that offers a fresh take on a well worn idea. While the price tag will leave you with a lot less to put in your new wallet, you can bank on it lasting a long time. Simply put, the Trayvax Element Wallet & Keyton Keychain are a great option for anyone who’s sick of a plain old bifold and bunched up keys in your pocket.