Over the past few months, we’ve reviewed several Colonel Littleton items, including the No. 18 Portfolio and the No. 40 Campaign Bag. Today, I’ll be reviewing the Wayfarer Tote in Black. There are a number of tote bags on the market, so let’s take a look at Colonel Littleton’s offering. 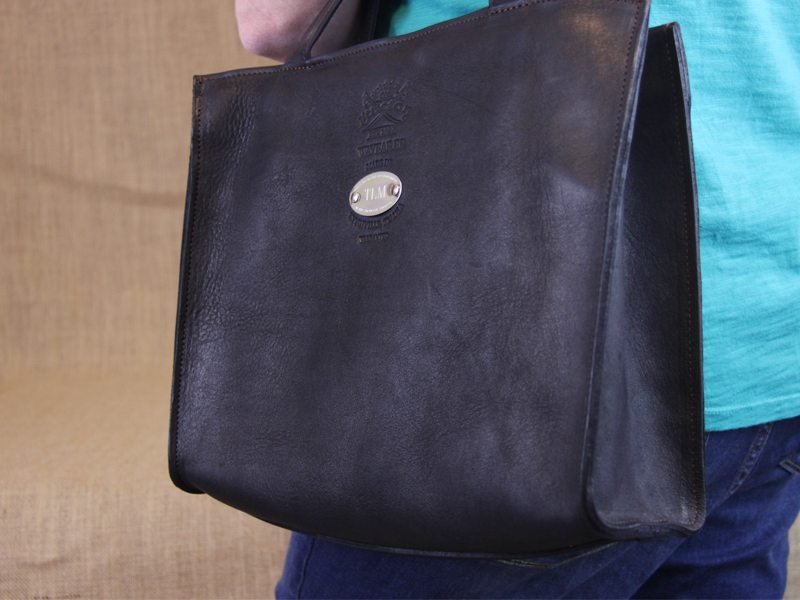 Colonel Littleton is based out of Lynnville, Tennessee, a town with a population of 327. The real Colonel Littleton himself got his start selling vintage cufflinks in 1987, which sparked an interest in creating unique, heirloom items. Now, 28 years later, Colonel Littleton makes bags, belts, hats, wallets, knives, cologne, and more, all with a unique Tennessee flair.

The beautifully textured black leather is the most remarkable feature of the Wayfarer Tote. The leather, like most of Colonel Littleton’s leather, is tanned in-house from American hides. It’s dry-milled, meaning the leather is tumbled in a dryer to separate and soften the fibers after it’s been tanned and dyed. This makes the leather incredibly soft and supple, inside and out. It’s not too floppy to stand up on its own, but it definitely has a very luxurious feel to it.

Like the other Colonel Littleton pieces we’ve reviewed in the past, the attention to detail is extraordinary. Each piece is expertly stitched, making this bag sturdier than the soft leather would indicate on first impression. Both the straps and the bottom of the bag are reinforced for strength.

The inside of the Wayfarer Tote is equipped with a zipper pouch and an open divided pocket to store a pens, phone, or other essentials. The rest of the bag is open to carry whatever you need. The straps have a 15″ drop, perfect for carrying over your shoulder. A magnetic snap closure keeps the top of the bag secured and gives it a nice shape as you’re carrying it. At 9″ deep and 12″ wide, the bag itself is rather shallow for a tote, so if you need to carry around folders or papers, this is not the right tote for doing so. However, if you think of it as more of a purse with long straps, it does its job perfectly.

The Wayfarer Tote is a classy, subdued accessory that does its job beautifully. You can tell just by looking at it that the leather is extremely soft and high quality. For an extra $9, you can customize your tote with three initials on an oval-shaped nickel plate. I would definitely recommend this; it’s a nice little way to personalize a relatively simple bag. The bag is available in black, saddle tan, or vintage brown, all beautiful, rich colors.

At $355, the Colonel Littleton Wayfarer Tote is definitely a splurge. It’s completely American made with careful attention to detail, and its classic look will never go out of style. The leather is some of the softest I’ve ever felt on a bag. Still, $355 is pretty pricy, but once you feel the leather, you won’t regret it.