I’m not in law enforcement, and I don’t wear a gun on a daily basis. The truth is, my interest in holsters comes primarily from Indiana Jones and Uncharted.

In other words, I was imagining a quest for Shangri La instead of considering functionality. I spent a lot of time looking for a certain style, something with a renegade panache. I was pleasantly surprised to discover the Andrews Leather Monarch Shoulder Rig and Holster, which excels in both style and utility. 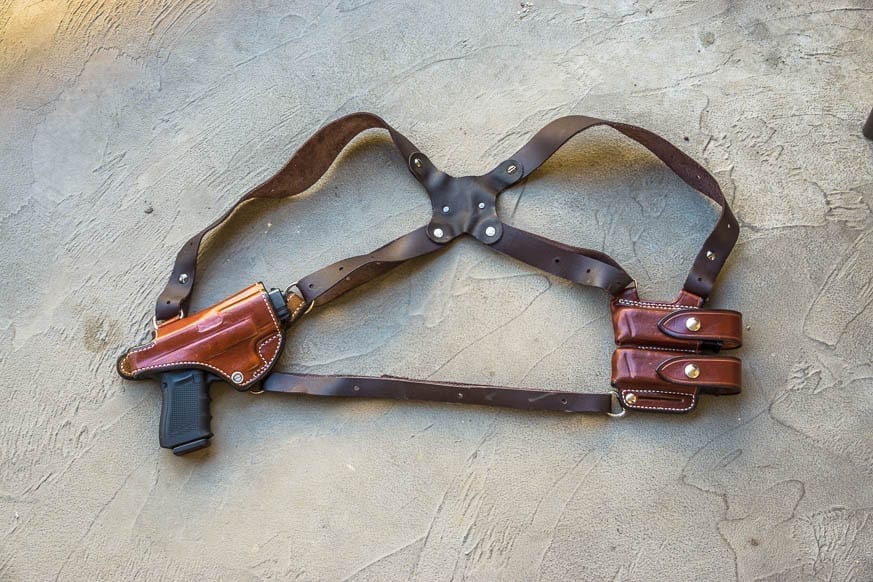 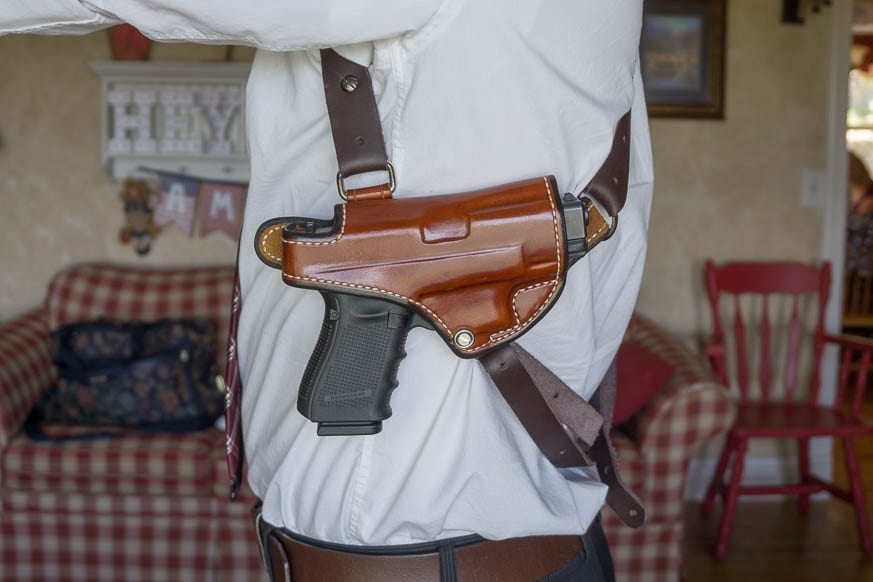 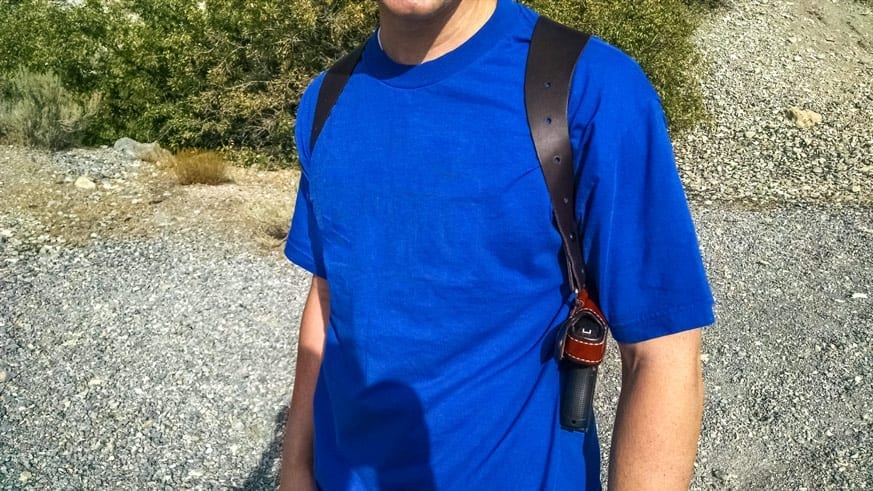 When I found pictures of the Monarch Shoulder Rig, I knew it was exactly what I wanted. But the site seemed a decade out of date, and I couldn’t find a place to order. I saw a phone number and called. A friendly voice greeted me: “My name’s Sam Andrews. I’m the owner.”

He spoke with a kind, mild, sincere tone. And although he mentioned being overloaded with orders, he seemed in no rush as he chatted with me. He told me he doesn’t do email—his hunt-and-peck typing is just too slow. And he prefers speaking directly with the customer anyway.

Sam said he’s been doing leatherwork for 41 years. It began when as a teen he cut apart a ruined police holster. Later he served as a police officer but left “because of the politics.” That’s when he stumbled into leathermaking as a career, and his business has been quite successful ever since. 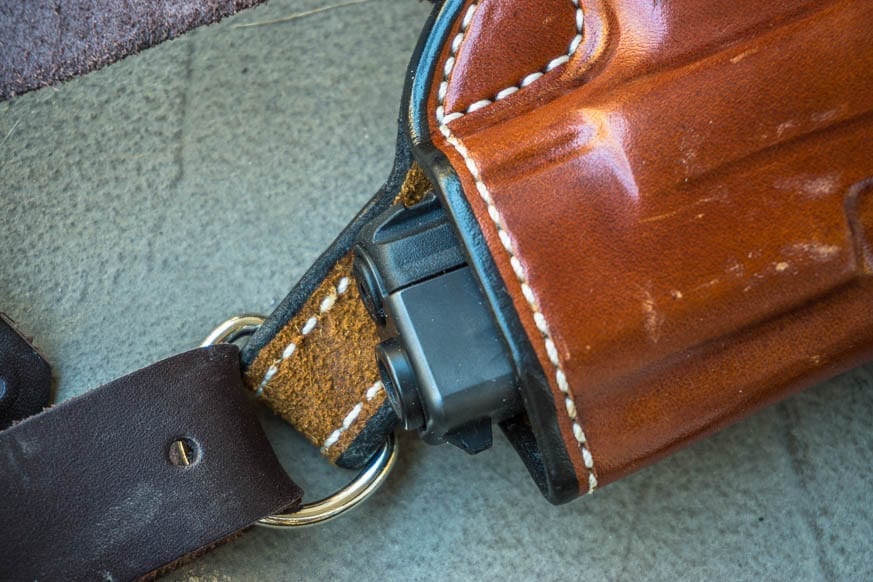 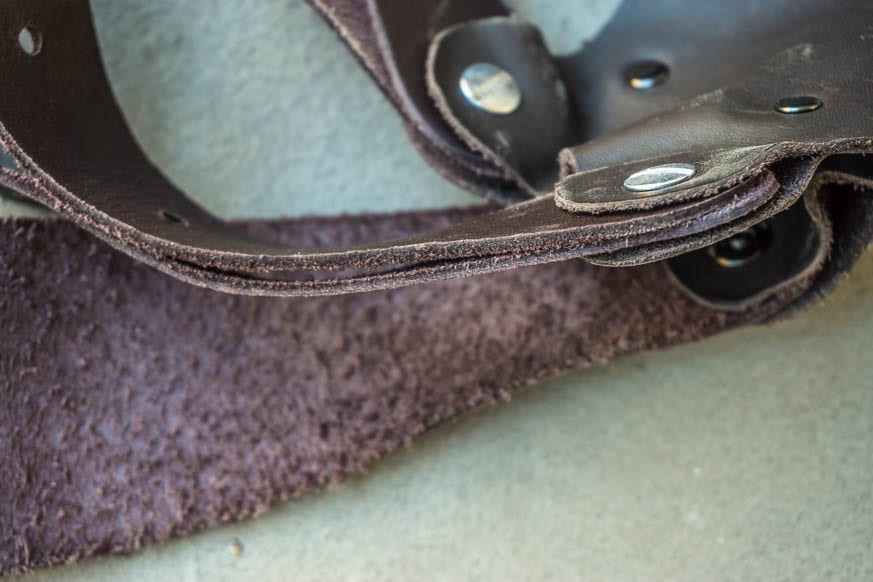 I first put on Sam’s Monarch shoulder holster while standing in front of a mirror, and I couldn’t help but grin.

The shoulder straps are made of a lightweight suede, which at first seemed a little too lightweight. But I soon realized this was for comfort. The suede trades durability and gains softness. It’s comfortable against your back and conforms to your body. I’ve never tested my bodyweight against it though, and I wouldn’t plan on hanging from it while sliding down a zipline. But it’s more than adequate for carrying a Glock and a couple loaded magazines.

The holster, on the other hand, is made of a heavy, cowboy sort of leather, stamped with the Andrews brand. Its weight helps balance the rig—the opposite of top heavy—keeping the equipment where it should be.

Sam shapes each holster to fit an exact model of gun, in my case a Glock 19, and you’ll see this in the contours of the molded leather.

I ordered the regular-sized Monarch Shoulder Rig, but Sam also makes an XL, because “some customers can’t fit their shoulders through a doorway.” That comment made me chuckle. 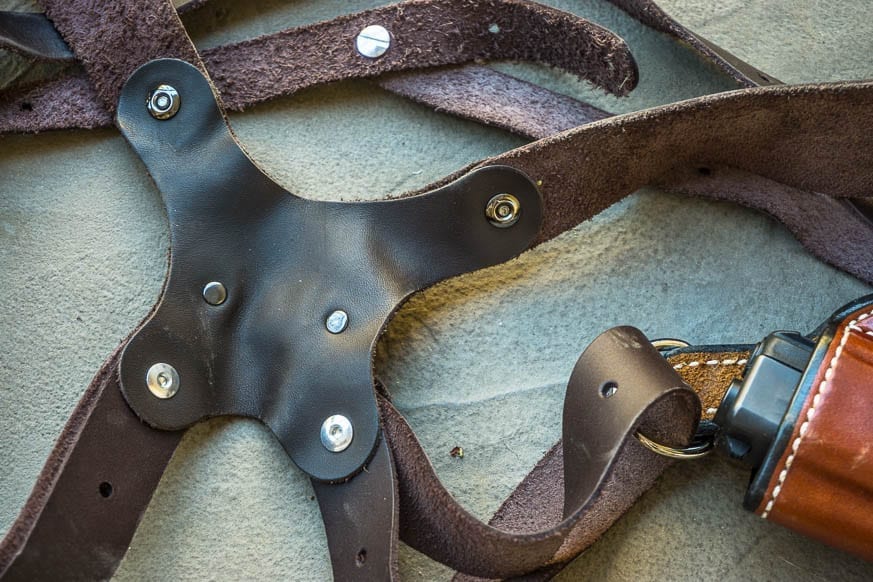 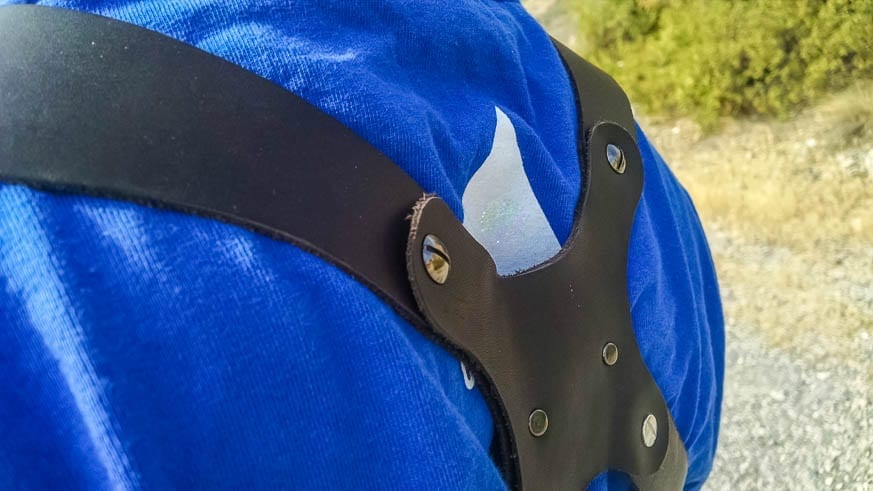 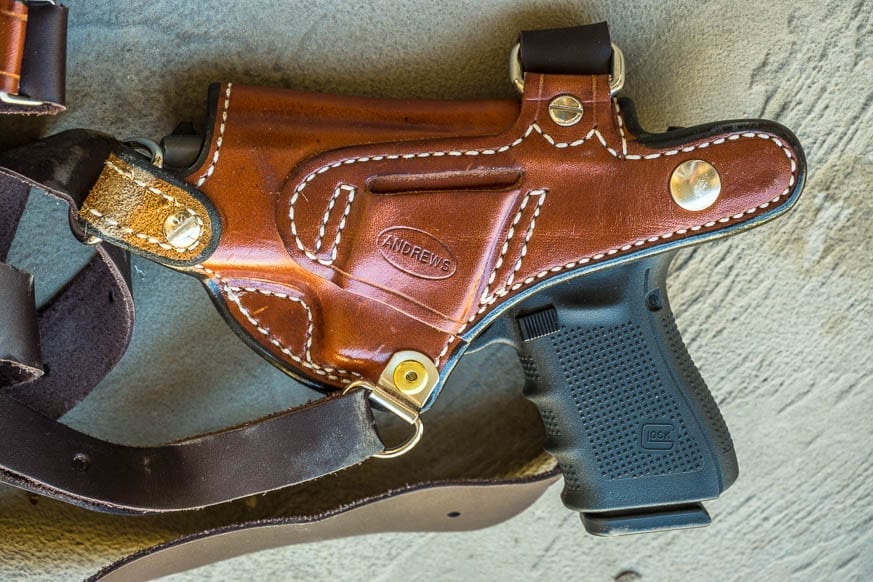 “Most shoulder holsters are designed by people who’ve never used one,” said Sam.

By contrast, he has years of law-enforcement experience and knows what functionality is needed. Even today, he tinkers with his designs, intent on finding what works best and what’s most comfortable. He told me this iterating makes the job fun. It also means he takes feedback from customers seriously.

One feature that grew out of this expert knowledge is the back strap, which steadies the rig and keeps it from swinging, particularly when you’re bending down or leaning forward. It’s a helpful feature that you won’t find on competitor’s rigs.

The holster is snug and grips the gun tightly even without the snap. In fact, there’s a specific screw outside the trigger guard that will let you adjust this tightness.

The holster snap is directional (this fact was even marked with a tag). That means you don’t snap it on straight down, but sort of at an angle, like you’re hooking over a latch. Just something to be aware of.

The holster also includes a belt strap, so you can take it off the shoulder rig and put it on your belt.

I’ve worn this rig a lot, for hours and hours. Since I don’t regularly carry a gun, I wore it during more mundane activities: making an omelette, doing pushups and pullups, watching Stranger Things, doing laundry, and driving to the shooting range. I’ve put in enough time to confidently say that this rig is very comfortable—I’ve even taken a nap wearing it. I love it.

There’s one functionality caveat I should warn you about. The barrel of the gun points horizontally behind you when you’re wearing this rig. It might even point slightly up, depending on how the straps are situated. This means the gun points at people during regular use. I don’t consider that a safety issue, but it made a few bystanders uncomfortable as I wore it. 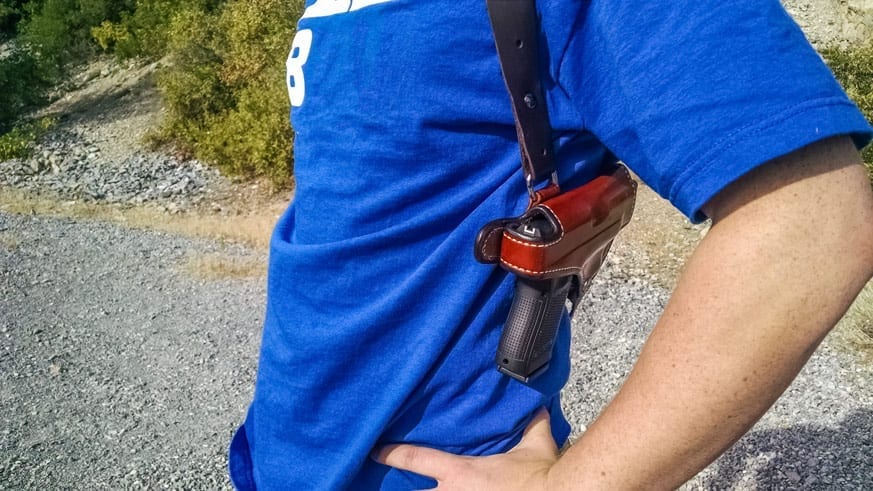 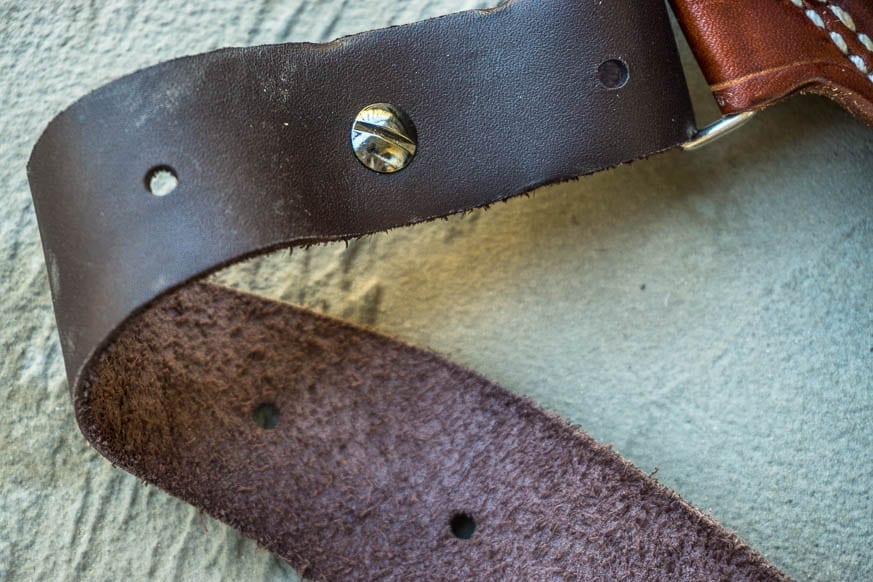 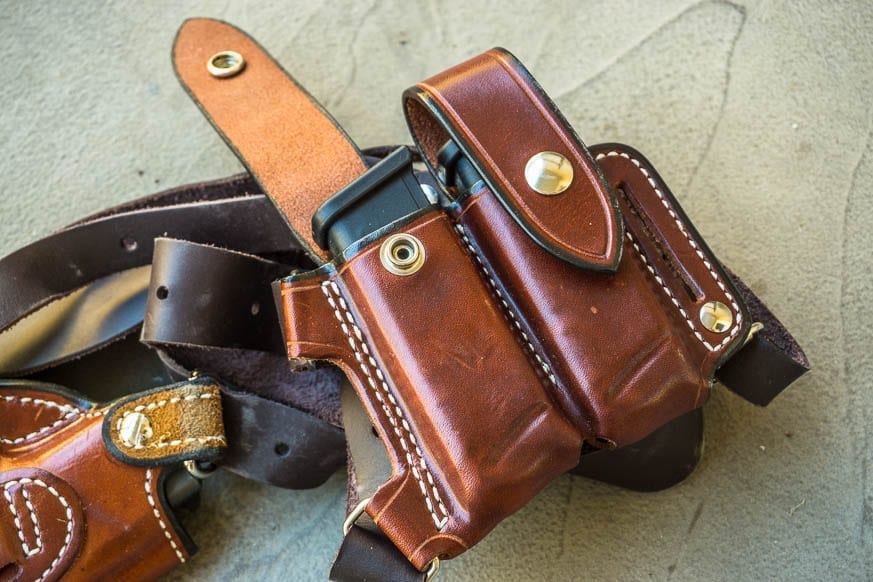 The Monarch design is beautifully simple: four leather straps held together by two layered cross-pieces and a bunch of thumb screws.

I will mention that when I first got the rig, the suede underbelly shed all over my shirt. Now that I’ve used it a bit, the shedding is gone.

Interchangeable pins in the shoulder straps make the rig adjustable, which is great. You can unscrew them with just a fingernail, but the thread angle is so shallow that I’ve never worried they might come loose. I changed my rig to make the top section (above the cross) longer and the lower section shorter. This shifted the cross more squarely between my shoulder blades (I’m all about the look).

And speaking of the look, Sam told me something for the sake of “sheer bragging.” A new Magnificent Seven movie came out September 23rd, and all the stars in it are wearing Andrews Leather. Also, two of the heroines in the upcoming Fast 8 movie will be wearing Monarch rigs—just like the one you see here. (As Sam told me this, he mentioned that Hollywood is king of last-minute changes, which “had me running around with my hair on fire.”)

In my mind, this connection with the movie business serves as a solid endorsement for the aesthetic. 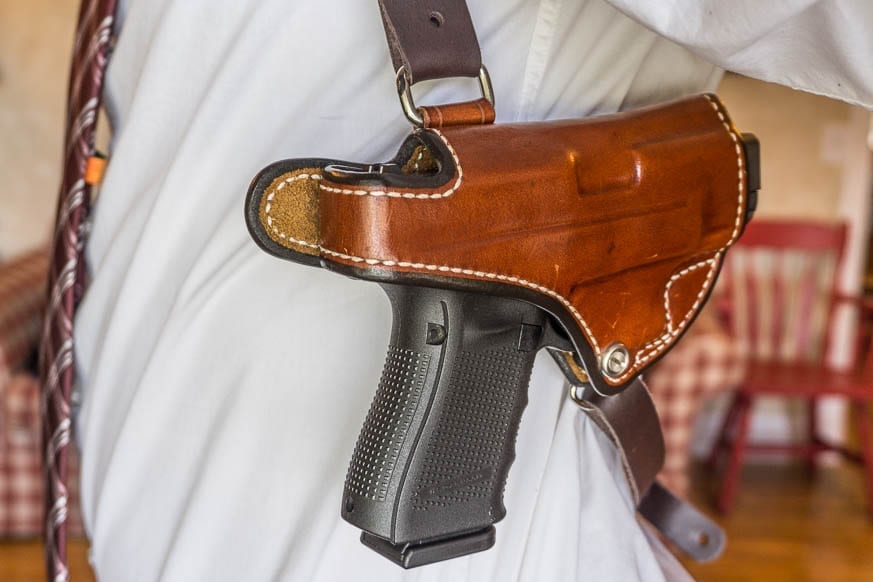 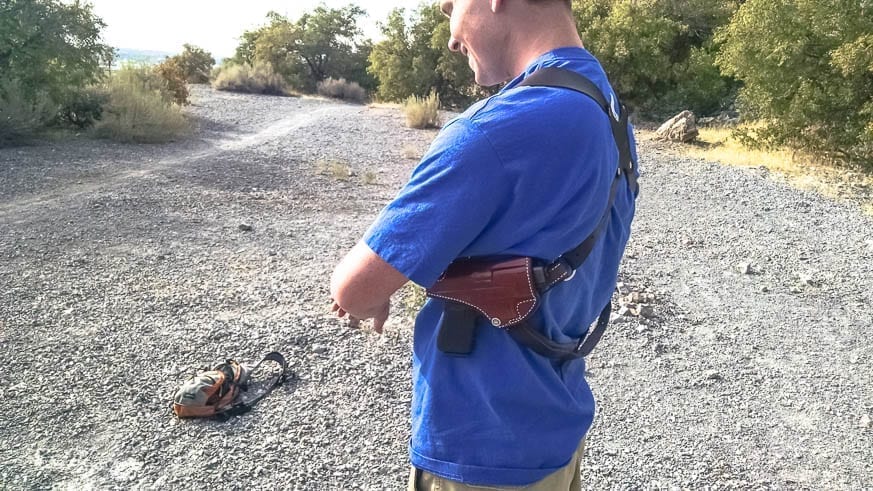 I love my Andrews Leather Monarch Shoulder Rig and Holster. It’s a fine piece of craftsmanship that looks awesome and works even better. Seriously. I’ve given you details on what I like with a couple very minor caveats. Overall, I think it’s a fantastic product.

Normally a link to the product page would be enough. In this case, I’ll also link you to Sam’s contact page. When you call, tell him J at BestLeather sent you. 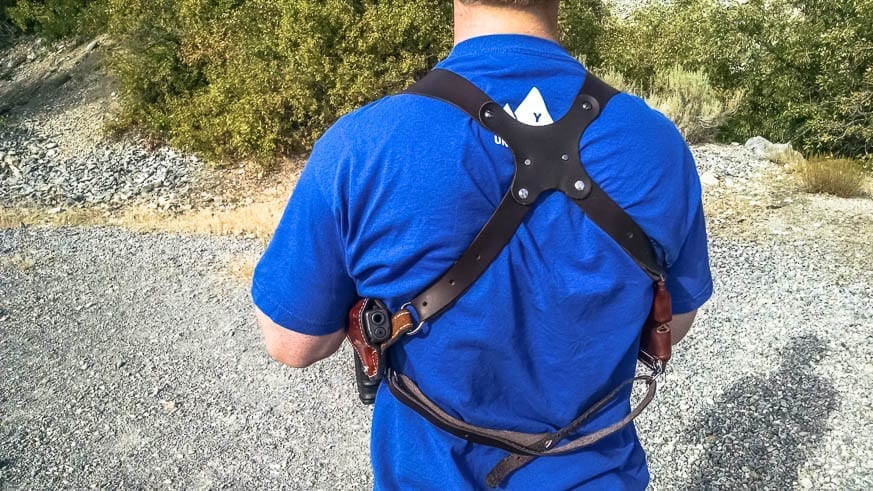 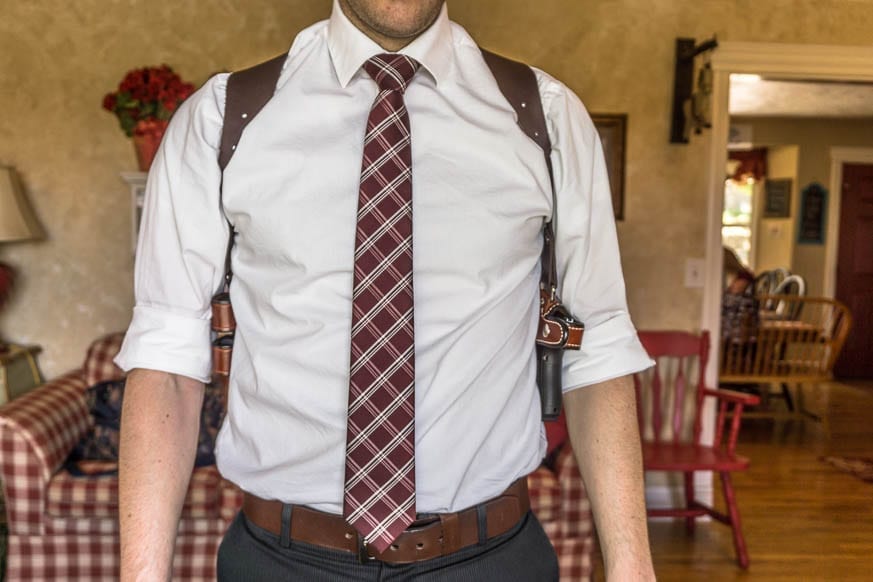 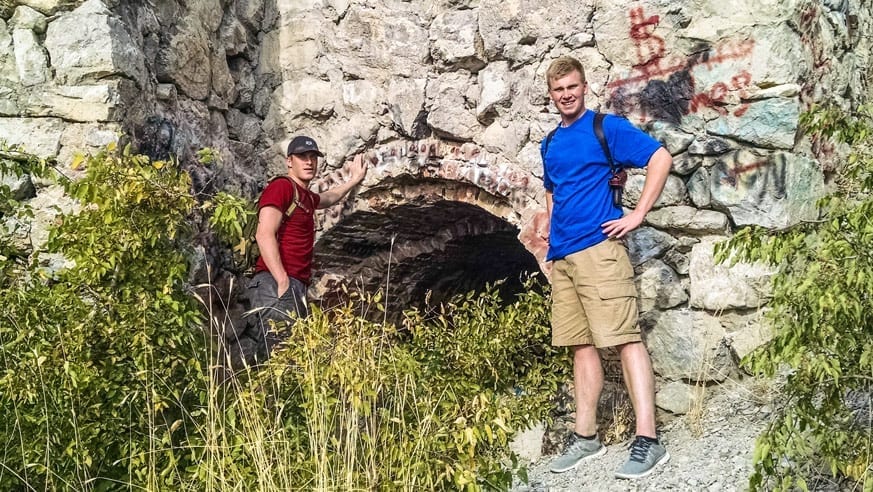 I ordered a shoulder holster and saddle hybrid from Andrews Leather on Dec. 17, 2016. Today is March 18, 2017 and I am still WAITING on delivery! After two calls, received a letter in mail on March 15, 2017 stating my order will be AT LEAST ANOTHER 4-6 weeks. Is this guy’s work really worth the wait andexpense??

I don’t know. I ordered a holster bath thanksgiving 2019 and Its the 3rd of July. When I get it I’ll let you know.

Absolutely!! I have been dealing with Sam for over 39 years. He (IMHO) is the best in the business . I have about 20 some pieces of his leather (including one offs). When one of my dog’s decided to chew up something of mine (out of revenge) she chose a one off ankle holster, showing her good taste in leather. Every piece of leather, with exclusion of issued duty leather is Andrew’s Custom Leather. I have (everyday) belts that are 25 years old and still in use. The “Best” is worth waiting for!

Man, Michael, that’s a tough call. I really like my shoulder rig. As for me, I’d say it’s worth the wait. He’s just a one-man operation, making leather products for big Hollywood productions. And the delay is largely because of the demand. He makes quality stuff. If you’re needing this for an upcoming event rather than the long term, you might want to look for a more commercial option. Otherwise, I think you’ll be grateful for the wait.

Michael, I have one of Sam’s Monarch rigs which was delivered around a year ago. I don’t recall my precise wait time, but it was at least six months IIRC, and was not within the vague wait time (shortly and not too long) I was advised of during the placing order conversarion with Sam. Point is the man is a craftsman and it will get done when it is done. What I will say it Sam didn’t bill my card until it shipped and his product is second to nothing. I will order from Sam again. So, if you want… Read more »

How did you get ahold of him we ordered a shoulder holster about the same time as you did in dec of 2016 and here it is almost April and no word. I would just like to hear something and now all the web pages have been taken down. Any help would be greatly appreciated.

Amber, what web pages are taken down? I am literally staring at Mr. Andrew’s website as I type this and it is fully functional and accessible and Mr. Andrew’s phone number is readily available in the section labeled “Ordering Info” on his website. Again, if one is ordering a holster from.a small, one (or even five person) shop – I would recommend calendaring a follow-up phone call one year out from your original order date. I’m constantly amazed that folks don’t understand that the custom makers (craftmen / craftswomen) cannot be addressing follow up phone calls every time they turn… Read more »

Thank you for your comments! The two plain black holsters from Andrews were to be a gift for my wife so she could carry her 4 inch SP101 357 when we went hiking and camping. It is April 20th, 2017 and they are still not here yet. I stopped calling too. When I told my wife about it finally, she replied,”why custom make a holster? As long as it is leather and fits the gun, who are we trying to impress?” Cannot argue with that logic. She is now quite happy with a hand carved Simply Rugged Silver Dollar Pancake,… Read more »

I have to say there is always an opportunity to say something negative when it comes to expectation of others and money. Also, to you who have had a significant wait time, it is worth it. I placed my order mid January 2018 and received it today. So Sam’s turn around time is getting better compared to the complaints. His products are second to none and you know that or you would not spend the money for the product. So let me end by saying that I am glad I talked to Sam the day I called, I’m glad he… Read more »

Sam has updated his website and moved to a bigger shop. I was very fortunate. The website lists a few already-completed holsters and damned if he didn’t have one ready made for the Sig Sauer P380 I wanted the holster for. I called him on Saturday morning and received it in the mail Monday. It’s perfect.